This was one of my favorite moments during Experience. These were two of the hottest emcees at the moment – with Joell being cosigned by Eminem and Cory by Lil’ Wayne. I had the unique opportunity to watch the entire process…MORE

This was a three-part series that was filmed over a lunch with Joe Budden and his then-girlfriend Tahiry, who was attempting to launch a modeling career. Part 1 discusses her involvement with JoeBuddenTV and launching her…MORE

I spoke with KRS-One & Buckshot about their feelings on Jay-Z releasing Death of Autotune shortly after KRS’ song of the same subject, Robot and naming 3 of his albums Blueprint, a title KRS has already used. He considers Jay to be one…MORE

RAEKWON
Slaughterhouse, Cuban Linx 2
During my interview with Raekwon,

CROOKED I
Speaks on the shooting & another shooting | ??? 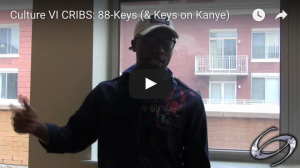 WALE
Speaks on Being Cocky, Lackluster Album | Self Made, Ambition, Making More ‘BMF’s

PackFM
What Does It Stand For?